Note 1 - All measurements to be in inches to the nearest eighth.

Note 2 - No protuberance to be counted as a point or as a random prong unless it is at least one inch in length from tip of point to outside of main beam. If the main beam is irregular at that spot, the outside of the main beam is considered to be the projected line of the principal curve of the beam, see Detail "A." Protuberances less than an inch in length are to be ignored.

Note 7 - The right antler is the antler on the right side of the deer.

Note 8 - Measurement "R", tip to tip spread, is not a scoring measurement. It is used to determine the bonus awarded to heads whose beams curve inward in the typical whitetail pattern, the reason being to protect them against competition from freakish heads whose beams flare straight out. This score is a bonus score only, and no score is entered if "R" exceeds "Q."

Note 9 - Penalties are charged for non-symmetry, random prongs, and excess spread. Since random prongs are obviously less important than main pattern points of corresponding length, the random prong penalty results in such prongs being given only half-credit for their length. The excess spread penalty is a further protection against freak heads, in addition to the bonus mentioned in Note 8, and there will be not penalty assessed in this column except in the rare cases where spread exceeds the average length of the main beams.

Note 10 - In counting the total number of points and random prongs, each beam tip counts as a point. 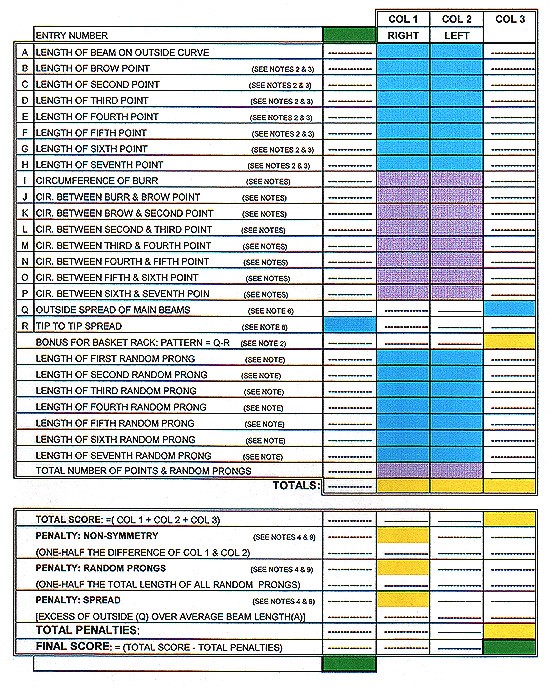